Cadbury team up with Claire O’Connor

XPOSÉ, TV3’s daily entertainment show, keeps it’s 500k weekly viewers up to date with all the latest fashion trends from around the world; it celebrates design and designers. Cadbury Ireland’s new sponsorship deal with the show will build on this fashion theme with the ‘Inspired by Collection’.

Over the next 12 months Cadbury will be giving ‘Xposure’ to a new crop of talented Irish designers who have created a collection of stunning pieces that have all been inspired by the Cadbury Crispello and Bubbly countlines.

Each day one designer will be featured over the four TV sponsorship stings. Each sting will tell part the story behind the design and will detail how different product aspects of the bar influenced each piece e.g. lightness, crispy, mint, etc 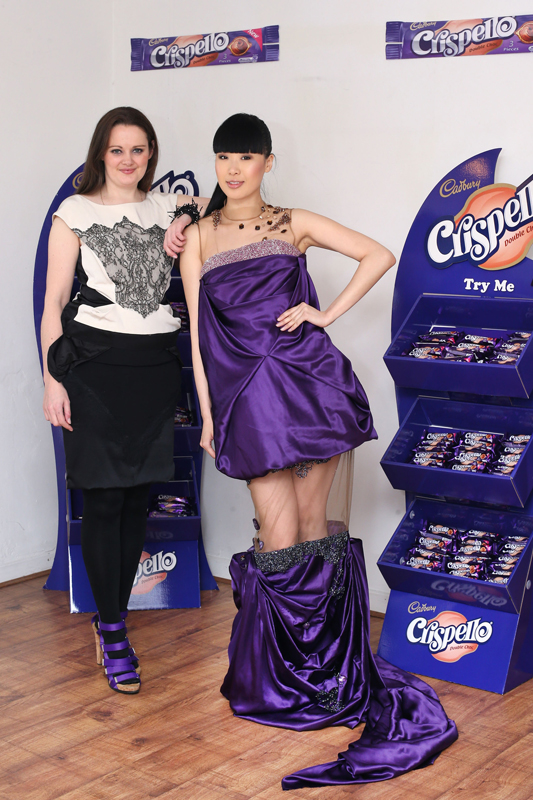 “When I got this Commission, I felt a bit like those costume designers employed by the great Hollywood Studios in the Thirties, Forties and Fifties. Though they hired the best designers and employed the top seamstresses – petits mains as they call them in the couture houses of Paris – their main intention was not to influence fashion, but rather to interpret the character in the film – like Rita Hayworth in Gilda or Grace Kelly in High Society. Many of their designs were sumptuous and exotic – what we now call red carpet style designs.

The character I was asked to interpret in this commission was a chocolate bar, Cadbury Crispello. It’s multi-layered (like any woman) – comes in three pieces actually. So that was my starting point. Chocolate, as we know is the ultimate expression of pleasure. It implies, luxury, relaxation and voluptuousness. Cadbury of course is synonymous with purple – the colour of luxury and of course chocolate is poured so I chose satin – the most liquid of fabrics for the endlessly pouring train. . This bar of chocolate like woman herself is full of surprises, The dress I have designed reflects all of this. It is a dress in three parts, if you like. It can be worn in three different ways.

There is the initial sculpted cocktail dress (short purple dress) which sets the scene and reflects the outer chocolate shell. Then there is a creamy centre (digital cloud print with beaded bust area) which is cream and fluid . I achieved this with bias cutting. There is the crispiness which is achieved by beading. And finally there is the total dress.
Despite the three parts and the fact that it can be worn in different ways , the dress is ultimately designed as one whole dress. It is very much a red carpet design –
It is for a star to wear. And of course a star is what the Crispello is. For me anyway.” 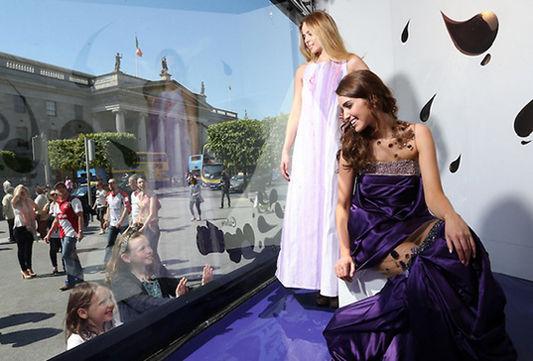